What was I listening to? What stage was I at? What time was it? I didn’t know and I didn’t care. I had been in the same tent for what must have been a few hours but had felt only like five minutes, good music followed good music, progressive house into deep drops and bellowing bass lines. Dancing, jumping and smiling within a feel good atmosphere with jovial people in a way very few places can produce but the Masked Ball can. 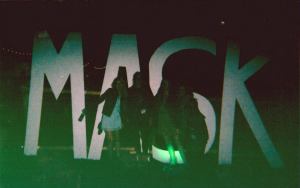 I left the tent sometime I believe was around 5:30 a.m as the sun was casting an unwelcome glow, signifying the approaching end to a vibrant night. Some people stumbled bow legged in the general direction of tents, some were trudging slowly towards car parks and pick up points, glitter still sparkling but their fancy dress tarnished with dirt, but most festival goers still occupied the four or five marquees and tents, as for them the morning was still a long way away.  I lay down on the hill which rolled away towards the North Atlantic, the views of the ocean pristine in the low light and a great place to nestle in the haphazard memories I possessed of the previous seven hours of my existence.

The Masked Ball is a strange place, its name and tradition encourages people to arrive in obscure attire, painted faces and a whole lot of glitter. Its schedule and energy encourages staying up all night, dancing to house music in tents on a grassy hill and its very relaxed and free-spirited atmosphere and  security encourages its party goers to indulge confidently in whatever they wish to endure the two day event still standing. My catalogue of memories for the 2014 summer Masked Ball are far, far from complete, however, my emotions and excitement still flares when looking back upon them. My experience of The Masked Ball is one of those that despite not being able to fully recollect, you know you had a great time. 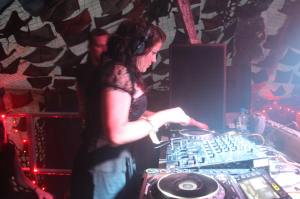 So who did I see? Well I saw many acts, many good performances but for the majority I don’t know who was providing this good music. I know I saw many acts as I remember running, skipping and climbing between stages trying to fulfil my unnaturally expansive lust to embrace everything the festival had to offer. Groove Armada headlined the festival and despite not knowing if I have seen the house music giants I do remember being in a large tent when the words “Groove Armada style” came cruising out the speakers. I do, however, remember basking in the presence of a DJ who gave a high energy, invigorating performance, and he, I learned was one Marcus Marr. I don’t know why it is only Marcus Marr I remember, maybe certain disturbances to my body where wearing off, maybe its because we had squeezed to the front of the crowd and where looking intently up at the DJ or maybe he was just so good that whatever state I was in I took notice.

Many people have said that this Summer’s Masked Ball was not as good as the last, since then the festival  have expanded in crowd and venue size and some critics have claimed that this has made it loose some of its fun loving atmosphere. As a first time Masked Ball attendee I found the atmosphere vibrant, joyous and captivating. Entering any of the tents which housed the stages soaked you in a feeling of excitement and happiness. This was particularly noticeable when entering the Jelly Jaxx Soul Circus tent which spent the entire night jam packed with bouncing carefree bodies. The fairy-tale mise-en-scene was also a joy to dwell within, with 60% of people in varying degrees of fancy dress striding around fairy-light strewn walkways and multi colored tents all upon a grassy bank leading down to the ocean. The masked ball may have lost some of its character but there is definitely still enough to go around.

Even despite the lack of clear memory I possess of my night at the masked ball I hold it in high regard and recommend it to anybody who wishes to slip from reality, climb down the rabbit hole and spend a night dancing and smiling. The next Masked Ball is there annual Halloween edition in October. Early Bird tickets are available to purchase at maskedball.net/tickets/